Bull Shoals Lake is a 45,150 acre man-made lake operated by the US Corps of Engineers. It has hundreds of miles of lake arms and coves perfect for boating, water sports, swimming, and fishing. Nineteen developed parks around the shoreline provide campgrounds, boat launches, swim areas, and marinas. The Bull Shoals dam was completed in 1951 to impound the White River by one of the largest concrete dams in the United States and the 5th largest dam in the world at its inception. The average depth of Bull Shoals Lake is 75 feet, with a maximum depth of 210 feet.

The source of the White River is in the Boston Mountains of northwest Arkansas, in the Ozark–St. Francis National Forest southeast of Fayetteville. The river flows northwards from its source in northwest Arkansas, loops up through southwest Missouri through Branson, Missouri. In Branson the river is actually Lake Taneycomo since it is held back by the Powersite Dam. The flow into this comes from Table Rock Lake and down stream flows into Bull Shoals Lake where it travels back into Arkansas, and then heads generally southeast to its mouth at the Arkansas River, then the Mississippi River. 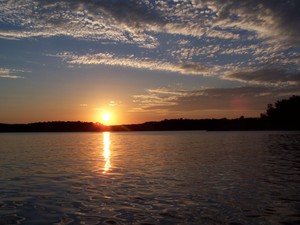